Mateo Blanco, the new jewel of the Teatro Martini 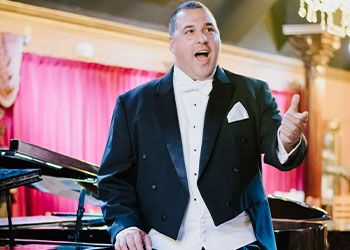 He has performed operas such as La Traviata, Rigoletto, Il Trovatore and Don Giovanni.

Miami, FL - (by MB) - Mateo Blanco reinvents himself again, known as tenor, artist and TV host on several television channels now returns with more force to Florida stages, this time he will be part of the Teatro Martini in the city of Orlando.

Blanco became known in the artistic world for being the first tenor to record a multi-genre album; He has performed operas such as La Traviata, Rigoletto, Il Trovatore and Don Giovanni. He has also made presentations accompanied by Aretha Franklin and his interpretation before the president of the United States, George H. W. Bush.

Mateo Blanco will make his presentations from Wednesday to Sunday in the Hall of Jewels, in the Teatro Martini, where he will be accompanied by the piano, performed in four hands on a rotating stage, amidst works of art and chandeliers inspired by the world of the pirates, the artist will perform arias of beautiful operas, as well as Latin American folk songs. In this room, funds are also raised to support charities.