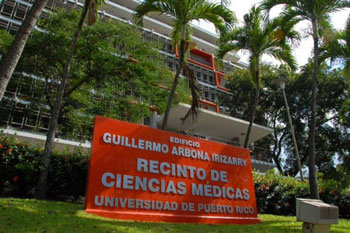 San Juan, Puerto Rico - (by Jaileen Álvarez - UPR) - The Center for Primates of Puerto Rico and the Caribbean (CPRC) of the Medical Sciences Campus (RCM) of the University of Puerto Rico (UPR), announced that it will develop a research in collaboration with the Imperial College of Science, Technology and Medicine from London, United Kingdom. The study entitled Evolutionary genetics of non-reproductive sexual behavior, including X, will investigate the relationship between genetic evolution and non-reproductive sexual behaviors.

Using behavioral data and genomic analysis, the study will quantify the causes and consequences of primates who have non-reproductive sexual practices.

“The collaboration agreement between both institutions has a period of five years. This will allow us to guarantee the continuity of studies aimed at investigating non-reproductive behaviors and knowing the findings of research carried out with primates. These studies will have the participation of dozens of researchers from Puerto Rico and Europe,” said the director of the Center, Dr. Melween Martínez Rodríguez.

For many years, the CPRC has supported the scientific community, through the rigorous and specialized management of rhesus macaques of Indian origin for use in studies of numerous diseases that afflict humans. In addition to the facilities in Sabana Seca, Cayo Santiago Island is also part of the CPRC. There researchers from different parts of the world observe rhesus monkeys in a semi-natural environment, for studies of behavior, movement, morphology, social relations and other areas of study.

For the CPRC, the care, protection and welfare of each animal is as important as the research that is carried out. Therefore, the CPRC animal care program is in full compliance with the guidelines established by the Animal Welfare Law (AWA) and is fully accredited by the International Association for the Evaluation and Accreditation of Laboratory Animal Care (AAALAC).