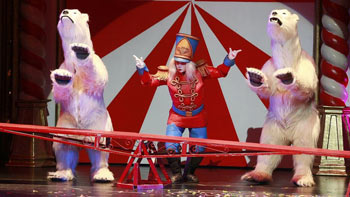 Las Vegas, NV - (by Hispanicize Wire) - Las Vegas-based La Fiesta Shows is partnering with La Fiesta Escénica (LFE) to bring some of Europe’s most highly regarded live entertainment productions to U.S. audiences as part of an exclusive alliance. For their first collaboration, the companies are co-producing NATALE – Journey to the North Pole, which will debut in San Diego this November.

NATALE is a nostalgic holiday experience with top acrobatic performers and dancing animatronic polar bears, as well as, an array of unique and inspiring surprises guaranteed to elevate one’s holiday spirit. The show traces Natale, as she sets off on her Journey to the North Pole on a quest to find the World’s Greatest Toy Store. Along the way, she encounters enchanted creatures that help her overcome the many challenges she faces crossing the Polar Cap.

NATALE, which in Europe goes by Nadal and other names, is a model for at least two other shows that the organizations plan to bring to the U.S., said La Fiesta Shows CEO Robert Armband, who formed the company in collaboration with COO Roman Garcia, former GM of Ringling Brothers and Barnum & Bailey Circus and Jon Weis, who has served as talent & production manager on scores of productions.

“La Fiesta Escénica has been producing top-notch live entertainment for more than two decades in Europe and Latin America and we are privileged to bring some of their best shows to American audiences that we know will love and appreciate them as well,” said Armband.

Said Roman: “I am very excited about working with La Fiesta Escénica World Wide, bringing their amazing creative talents to America. What better place than to begin our tenure in the amazing city of San Diego. Their unique fusion of traditional circus disciplines and modern theatrical implementation in addition to a new wave of animatronic animation displays make La Fiesta Escénica shows one of a kind, second to none, and a must-see event.”

For LFE Director Abel Martin, the opportunity to expand the Spanish company’s reach with the right partner made the timing of the opportunity irresistible. “Our partnership with La Fiesta Shows will help us break into a U.S. marketplace that we know will embrace the quality, family-oriented productions we’ve created and will further expand our fan base globally.”