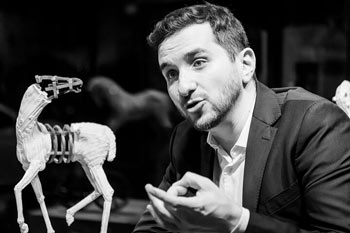 Orlando, FL - (by MB) - The Florida artist Joaquín Restrepo exhibits simultaneously in the United States, Colombia and Mexico, in the three countries he has workshops where he creates his work in situ.

Restrepo since its inception as an artist has broken the traditional schemes, making exhibitions in parallel with his art studies, so his training was done with great figures of Colombian art mixed with the University faculty of arts. His first auction was at age 19 and his work exceeded all expectations, even its price was higher than his then university professors, in the traditional auction organized by the Green Heart Foundation together with the Christie's house in New York, with who has been working for more than a decade. He also Donated one of his works to the Wells Built Museum in Orlando to help raise funds and awareness of the importance African American Culture.

He is an unconventional artist, his art has roots in classical art combined with the latest technology, “people often ask for my workshop, however, my workshop is not a single space, there are many places, some real and some virtual in several countries where I make part of my work. I do not usually have saved work, my desire is not to create a lot of work but to do jobs that are timeless and I look for that transcend time, ”explains Joaquin.

The simultaneity of his exhibitions in August began in America with an event on the 1st Thursday of the month, with three of his horses at the Orlando Museum of Art that houses the collection of works by Robert Rauschenberg, Chuck Close, Robert Longo, among others . Likewise, his totems will be exhibited at the Virginia Miller Gallery in Coral Gables, Miami. Your route unfolds to the Osceola Center of the Arts, then to the City Hall of Orange County, Osceola County and the city of Orlando between August and October, the best of the city is exhibited in this place and in September they will celebrate Hispanic Heritage Month where the works that help enrich American culture.

The next station on its route is Mexico where the exhibitions that it inaugurated in the first half of the Rodrigo Rivero Lake Gallery in Mexico City and in San Miguel de Allende -Guanajuato- in the Marquesa de Mancera area of ​​Marina Fernández de Cordova. The exhibition is made up of the works Adam, Eve, Alter ego, Amor fati and Liberum memoria, which is also in monumental format, six sculptures that allow visitors to visualize different periods in the same space.

In Colombia, the artist continues his exhibition at the Luis Fernando Molina Gallery, which will be until the end of the month, in the city of Medellín, and from August 14, the El Nogal Club Gallery in Bogotá will begin the exhibition Experiencing the matter with the painter Carlos Torres There he will present the three horses and the two human figures that are part of his artistic take of these cities, globalization and new advances in technology allow the artist to be omnipresent in the market.

Restrepo is an organized and disciplined artist who invents his own rules, his works function as troops that help him open the paths in his own way. Everyone wants to visit the artist's workshop, but he does not believe in the conventions of art, his way of working is nomadic, perhaps it is something that he carries in his blood through Sephardic roots. “Exhibiting simultaneously is a way to make the work become relevant through time and mature with each encounter it has with other cultures, which is timeless. The artist must be popular, the work has to be exclusive, ”says Restrepo.

“Collectors have begun to buy the artist's work in advance, thus ensuring availability and this in turn, allows Restrepo to conquer new spaces and thus value the work of those who trust his work.” Says Mateo Blanco, manager of the artist in the U.S.

How to open markets and increase exclusivity?

For me it is key to expand, this way, the exclusivness of my work is preserved. Each of these new spaces has a limited number of pieces. Before in the US there could be six pieces, now there are no more than two. I believe that Less is more.

I want to die leaving very few works behind, but I want them to be with good art collectors and that those who have them, enjoy them.

Art is a form of currency and in the digital era where there is so much talk about blockchains and cryptocurrencies, art will always be the safest and the only currency one that really belongs to you, a more interesting investment than real estate, the stock market or even gold.

Is it important to become / become a brand?

It is not really a brand issue here, art should be about transcendence, about absorbing history. Art merges time and space.

In December I have an exhibition that will unite France, Belgium and Colombia in a gallery in New Smyrna Beach. By 2020 come bigger and more ambitious projects.

I am also working on a tribute to former Colombian president Belisario Betancur that will be installed in Barichara, Santander. City in which he worked tirelessly to strengthen the local culture.