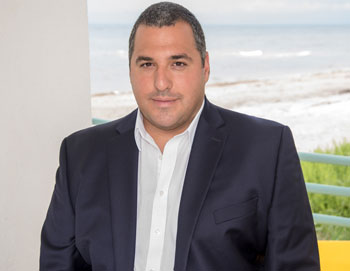 Boca Raton, FL - (by MB) - Women who make history have always been part of artist Mateo Blanco’s life, helping shape his artistic perspective and serving as subjects for the work that gained him international acclaim.

Now, he is honoring some of those women through his debut at the Rosenbaum Contemporary Gallery.

Blanco, known for his use of unusual materials—everything from peanuts to sugar to cloth scraps—in celebrity portraits has three pieces on display.

First is a portrait of talk show host and actress Ellen DeGeneres made of 5,000 Colombian coffee beans. Also on display is a slatted image of superstar Madonna that changes as the viewer changes perspectives. Finally, Blanco created the sculpture “Hopi Girl,” the form of a young woman made of rope, which pays homage to the Native American tribe and evokes images from “Star Wars.”

The works are tied together through the strong women they represent.

“I have so much admiration for the strong women who change history,” Blanco said. “I also want to honor the LGBTQ+ community with my portraits of icons Ellen DeGeneres and Madonna.”

That theme has shaped Blanco’s life, too. Blanco studied under Débora Arango, the artist immortalized on Colombia’s 2,000 peso bill. She was known for her politically charged paintings of nude women that challenged Catholic values. Blanco was also a student of Arturo Estrada Hernández, most famous for his mural work, and a member of “Los Fridos,” a group of Frida Kahlo’s students.

Much of Blanco’s other work, too, centers on notable women. Some of Blanco’s best-known pieces include a portrait of actress Jennifer Lawrence made of 10,000 peanuts and a portrait of musician Dolly Parton made of cloth.

The Rosenbaum Contemporary Gallery is featuring Blanco’s works for the first time in its Summer Selections, along with some of the most famous artists in history, Pablo Picasso , Alexander Calder and Fernando Botero. The exhibit runs through September 21 and can be viewed Tuesday through Saturday from 10 a.m. to 5 p.m.

Blanco’s art has been featured throughout Florida and the world. While he was born in Miami, his home is in Orlando.