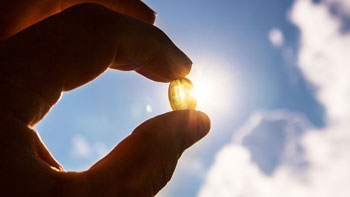 New studies are casting doubt on the effectiveness of these supplements

Yonkers, NY - (by Janet Lee, CR) - A ccording to some reports, we’re in the middle of a “pandemic” of vita­min D deficiency, raising the risk of not just bone fractures but also heart disease, type 2 diabetes, depression, and more. And worries about these perils have led to an increase in vitamin D screening and supplement use: 31 percent of Americans ages 60 to 69, and 39 percent of those 70 and older, take high-dose (1,000 international units or more) vitamin D pills.

“Having low or deficient levels is not a part of normal aging, but it is very common,” says Audrey Chun, M.D., an associate professor of geriatrics and palliative medicine at the Icahn School of Medicine at Mount Sinai in New York City.

As people get older, she says, they tend to spend less time in the sun—which is what prompts the body to make vitamin D—and are less efficient at producing the nutrient.
Problem is, there’s a lot of confusion over the definition of deficient and whether you need more D than the daily recommended 600 IU (800 IU if you are older than 70). Recent studies have called into question the value of vitamin D supplements for most people.

Before you ask your doctor for a test or start popping pills, consider these facts.

The Evidence on Extra Vitamin D
“We know that people with low vitamin D levels are at risk for health problems, but the question is, If you treat the low vitamin D, can you prevent those issues?” says Erin Michos, M.D., an associate professor of medicine and epidemiology at the Johns Hopkins University School of Medicine. “And there haven’t been any trials showing this is the case.”

A recent study of more than 25,000 people 50 or older, published in the New England Journal of Medicine, found that taking 2,000 IU of vitamin D daily for five years did not decrease the incidence of cancer or cardiovascular disease.
“Even those people who had low vitamin D levels to start with didn’t see a benefit,” Michos says.

As for building bone and preventing fractures in older people, “a lot of people think the evidence is more robust than it is,” Michos says.

In a study of 379 adults 70 and older published in the American Journal of Clinical Nutrition, monthly doses of vitamin D (which averaged out to 400, 800, and 1,600 IU daily) failed to build bone mass or prevent falls. An analysis of 81 studies (PDF) published in 2018 in the journal Lancet Diabetes & Endocrinology came to a similar conclusion.

“We didn’t find evidence that vitamin D prevented falls and fractures, but there were very few trials with people with ¬really low vita¬min D levels,” says Alison Avenell, M.D., clinical chair of health services research at the University of Aberdeen in Scotland and one of the study authors.

Who Needs Screening?
Physicians use a blood test called 25(OH)D (25-¬hydroxyvitamin D) to check vitamin D levels, but there’s no general consensus about what constitutes a “normal” level, according to the U.S. Preventive Services Task Force, which establishes recommendations about preventive health interventions and screenings.

A “low” from one lab could be an “ade¬quate” from a different one.

Experts often rely on the National Academy of Medicine guidelines: Below 12 nanograms per milliliter is considered deficient; between 12 and 20 ng/mL is low. In the NEJM study, among those who had their vitamin D tested, just 13 percent fell below 20 ng/mL.

“We don’t recommend across-the-board vitamin D screening for older adults,” Chun says. People who are frail or in nursing homes should be checked. “It’s also reasonable to get screened if you’re a postmenopausal woman who might have osteopenia or osteoporosis. And men 75 or older should consider getting screened as well since they’re at risk of osteoporosis, too.”

Most people can meet their vitamin D needs without a supplement, so there’s no reason to take one unless your doctor advises you to.

More vitamin D is not better, especially because excess amounts of the nutrient could increase the risk of kidney stones in some people.